Reading & Writing: Step By Step Of A Conceptual Photo By Alper Yesiltas

Comments Off on Reading & Writing: Step By Step Of A Conceptual Photo By Alper Yesiltas
106 shares

Turkish photographer Alper Yesiltas explains step by step process of how to capture a conceptual photo.

In art, it’s always easy to find a subject to read but it’s always difficult to find a way to interpret it. In this photo, I tried to interpret “Reading” through a reader with the burning newspaper and the facial expression behind burning lines. 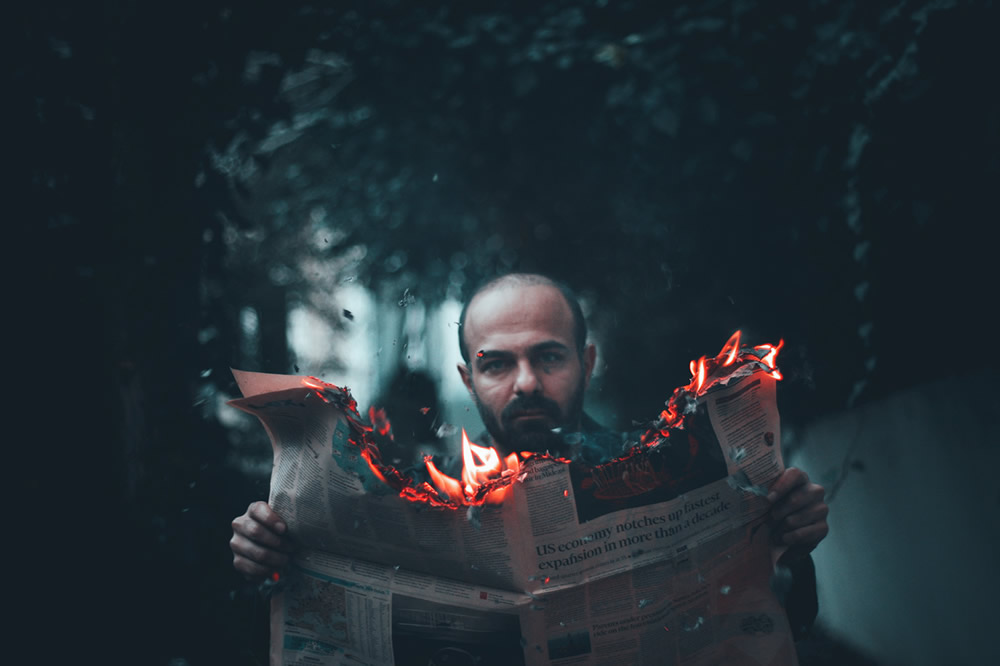 Reading is one of the simplest actions because you always read what others wrote (as it is now). What you’ve been reading could be right or wrong.

I wanted to interpret “Writing”. But it wasn’t that easy. Writing is something that mankind could only discover after long thinking and learning about how to drive and create certain mechanisms.

In order to explain how to write, I decided that I had to create some mechanisms and use them. The place you see in this photo is a friend’s studio. This is a test photo I took the first day I saw the place. When I looked at the place from that angle, some images started to appear in my mind. In order to emphasize the illumination of writers to its surroundings in historical scale is the most important initiative in the process that leads people from darkness to light, I thought of placing black and white, that is dark and light, as a main symbol to the photograph. According to the “Writer” picture in my head, a writer would need a table, a typewriter and a large number of books. The problem was that in order to capture the image in my mind, the frame of the photograph had to be kept a little wide, so the table had to be preferably larger than the size of the frame.

The outside of the frame in the photograph I was going to shoot would be as busy as the interior.

I was fortunate to find a proper piece wood that I could use as a tabletop in the clutter of a carpenter in the same street. Although it was very hard to carry the piece because it was 4 meters wide and weighs about 150 kg. We spent a lot of time cutting iron at a workshop downstairs. My giant iron setup was finally ready. After bringing it to the studio and spending a few hours, we finally managed to build it. The task of the giant iron setup was to create a ceiling with a depth that could be used to hung a lot of books in several places, so they could be suspended in the air. The photograph would be the depiction of an abstract moment in the author’s mind. The books had to move in such a way that a harsh wind broke away from the ground.

The depth of the ceiling was therefore important. I would be able to freely determine the movement I would create by adding the books back to back. I fixed the books to the ceiling using fishing lines, safety pins and buttons. Close to the end, the objects in the frame looked like this. I took myself countless times using the camera’s timer to make the necessary adjustments. I created the mechanism I needed to turn the reflection of the act “Writing” in my mind, into a picture.

This reflection was completed with the unique response of my friend, actor, Ercan Kesal. My name is Alper Yesiltas, lawyer & photographer living in Istanbul, imagining scenes and capturing memories for about 15 years. During that time, some of my photos are edited worldwide in books, magazines, exhibitions, web sites and were awarded in several photo contests. I believe photographic eye is in a person’s brain, not in his/her bags or hanged around his/her neck. If you manage to put it somewhere in your brain, every moment is the right moment to take it. So think about it. Remember, it’s your imagination, everything’s possible in your scene. You can find Alper Yesiltas on the Web :

Copyrights:
All the pictures in this post are copyrighted Alper Yesiltas. Their reproduction, even in part, is forbidden without the explicit approval of the rightful owners.